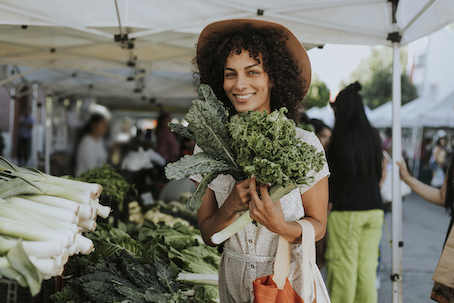 If you have insulin resistance, prediabetes, or type 2 diabetes, chances are you’ve come across “the talk” about your diet. Whether you got it from your research online, from a friend, or even your healthcare provider, “the talk” tells you that you can help normalize your insulin metabolism by eating more fruits and vegetables and fewer simple carbs.

This is pretty good advice, too. But it doesn’t go far enough, because some of those “good” foods are not good for you, and you’ve got to consider how those foods are prepared, not just what they are. And “the talk” almost certainly didn’t tell you to buy organic produce or thoroughly wash anything that isn’t organic — because few practitioners know there’s a connection between pesticide exposures and insulin resistance.

But solid research has shown that this link exists, and it affects your prognosis.

A 2015 meta-analysis by the European Association for the Study of Diabetes looked at 21 studies examining pesticides and diabetes risk — and the findings are troubling. After looking at these studies, which included a grand total of 66,714 people, there was a 64% increased risk of type 2 diabetes in those exposed to pesticides. Among the pesticides most likely to increase risk were the endocrine disruptors DDT, DDE dieldrin, heptachlor, PCBs, and HCB.

That review, by itself, should upset the dietary advice given to everyone with insulin resistance, type 2 diabetes, or anyone concerned about balancing their blood sugar. But there are literally hundreds more studies in humans and animals that examine the connection between pesticides and diabetes, and their findings are more than just troubling — they call into question our very model of these diseases, both what causes them, and how we should treat them. However, this is something you won’t likely hear that from your doctor!

What the science tells us about pesticides and insulin resistance

Accumulated data is clear that—as one recent review in the toxicology literature bluntly described it—“the majority of human studies have shown a positive association between exposure to certain type of insecticides and [the] risk of diabetes.”

Despite the clear weight of the scientific evidence, insulin resistance is not regularly mentioned as a consequence of pesticide use. It may be because the effects are so insidious: While different classes of pesticides have different effects, in general, they impair glucose and lipid metabolism as well as promote weight gain, all of which can contribute to the development of diabetes in an otherwise healthy person. And even low doses of pesticides typically considered “safe,” such as permethrin — commonly used to treat lice in children — can increase the likelihood of insulin resistance .

How do pesticides impair insulin metabolism?

The basic mechanism of action is that pesticides are neurotoxins — that is, they attack the nervous systems of the insects they’re designed to kill. In humans, at low concentrations, their effects aren’t deadly , but they stress the systems that regulate glucose homeostasis — the maintenance of stable blood sugar levels, which is an imperative for healthy brain and metabolic function.For instance:

The terrible irony of this situation is that a woman who is worried about her weight and decides to eat more fruits and vegetables as a way to reduce her risk of insulin resistance and diabetes may inadvertently be increasing her exposure to chemicals that make her situation worse — not better.

How much exposure is too much?

One of the most uncomfortable facts of our food supply is that we simply have no idea how much of these chemicals we’re exposed to. The reality is that many pesticides — even the ones banned years ago, like DDT — hang around in the environment for years, even decades. They’re in soil, water, even air — and the foods we eat are affected either directly (when the plant foods are sprayed with these chemicals, or when animals eat pesticide-treated plants) or indirectly (when plants or animals take in pesticide residues in the water and soil). One European analysis detected two or more pesticides in 74% of soil samples—so you can only imagine how much worse the exposures are in countries where chemical use is less tightly regulated.

So it’s very, very difficult to measure our exposure to pesticides. And, of course, we’re all different in how we process toxins in our food. What’s clear, though, is that minimizing our exposure to these chemicals can only help. And here are some ways to do it:

Eat organic if you can. Organic fruits and vegetables are not treated with pesticides. That doesn’t mean they’re pesticide-free — there’s no guarantee that pesticide residues aren’t in the soil and water where they’re grown — but they’re certain to have fewer pesticide residues than conventional produce. If your budget is strained by an all-organic diet, pick and choose your conventional versus organic choices so that the worst offenders — the so-called Dirty Dozen — stay off your menu.

THOROUGHLY wash your fruits and vegetables. If you must eat conventionally grown produce, don’t just rinse the food before you eat it—wash it, even fruits with a peel or hard-shelled veggies like squash (and keep in mind that the pesticides can be transferred to your hands while you’re washing your food, so either wear gloves or scrub your hands afterward before eating the food).Soaking apples in a solution of baking soda and water has been shown by researchers to remove pesticide residues, but it takes a surprisingly long time — 12 to 15 minutes. So don’t rush the process — or, if you are in a hurry, scrub with a brush instead of soaking.

Buy local and in season. Pesticides absorb into plant tissues over time, so the longer your apples or strawberries go unwashed, the more gets into the actual fruit—which means you’re better able to avoid contamination of your food if you get it right after it’s been picked. Farmers’ markets are the best source of local fruits and veggies, but obviously, this means you’re going to have to pass on eating melon in winter (unless you’re in a warm climate where it can be grown year-round!). Many fruits and veggies are available in the supermarket out-of-season, but they’re grown in countries like Mexico, Peru, and Chile, where pesticides aren’t as strictly regulated as in the U.S. and Europe — so you may be risking exposure to some of the worst chemicals out there.

What else can you do to limit insulin resistance?

Insulin resistance and diabetes have a lot of contributing factors, so reducing your pesticide exposure by itself isn’t enough to guarantee your long-term health. But whole-body wellness has no single, one-stop solution, so if you’re already taking other steps to limit your risk — getting regular exercise, avoiding processed foods, limiting sweets and sugary beverages — then being conscious of chemical exposures could be an important factor that tilts you back toward health.

The latest on blood sugar

See all articles on blood sugar