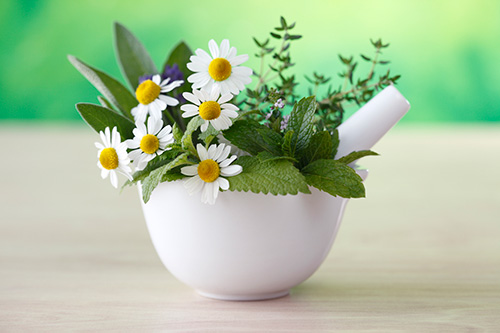 To learn more about the intricate connections between emotions and our digestion, see our other articles on GI health:

Long before Pepcid®, Alka-Seltzer®, TUMS® or Pepto-Bismol® hit the shelves of your local “apothecary,” people everywhere regularly turned to the plants that were already growing around them to heal their digestive system complaints. Today, many of these same botanical remedies remain in widespread use for common symptoms of digestive system problems. Bouts of nausea, motion sickness, morning sickness, vomiting, heartburn, dyspepsia, bloating, belching, flatulence, or diarrhea, when occasional or mild, can all be self-treated, frequently to good effect. More serious or persistent digestive disorders, such as intestinal infections, diarrhea, chronic acid reflux, inflammatory bowel disease (e.g., Crohn’s and ulcerative colitis), or peptic ulcers, among others, should be discussed with a qualified professional. While these more problematic digestive concerns can also be treated with herbs, results can be much more variable, and professional guidance is important to ensure a successful outcome.

Meant for the milder or occasional GI upset, this is an introduction to a handful of gentle, “kitchen-garden” remedies that are often effective. Most women can safely use these herbs as antidotes to the occasional GI upsets we nearly all experience from time to time. (If your GI symptoms persist or worsen, do consult with a qualified healthcare professional for assistance.)

For healthy digestive function, our bodies must be in a relaxed state. When we’re in an anxious, fight-or-flight state, digestion always takes a back seat to dealing with the stress or. When we eat in this state, it’s common to develop digestive disturbances. For those whose digestion is easily disrupted by emotional upset, botanical nervines can have a pronounced positive effect on the nervous system that is followed naturally with relief in the digestive system. They do this by reducing the stress response — an adaptive triggering of the sympathetic nervous system accompanied by a simultaneous turn-off of any other bodily function not required in an emergency for survival. In essence, these herbs help heal our nervous stomachs by making us more serene.

Certain plants have what are called adaptogenic effects. This means they are capable of having opposite actions — relaxing or stimulating — depending on what is needed at a particular moment in time in a person’s body. In the case of nervines, some herbs can function both as relaxant nervines — which are thought to work by relaxing constricted or contracted tissues in the nervous system — and as stimulant nervines — thought to stimulate lax or stagnant tissues in the nervous system. Other herbs are more nutritive for the nervous system. Here are five great botanical herbs that aid digestion.

The use of essential oil of peppermint as a digestive aid probably dates back to ancient Greece. Several thousand years later, a body of scientific research now exists that supports its use, particularly in the form of delayed-release, enteric-coated peppermint oil capsules, for symptomatic relief of irritable bowel syndrome. An enteric coating on the capsule allows for the oil of peppermint to pass undegraded, through the more acidic upper regions of the GI tract, to the lower intestine, where, as reported in the British Medical Journal more than 30 years ago, it has the effect of a gentle smooth-muscle relaxant, serving to calm digestive spasm, inhibit GI contraction, relieve gas, and reduce pain and discomfort.

What’s the difference between a tea, a tisane, an infusion, a decoction, and a tincture? Here are some of the many methods we employ to capture the essential oils and additional active constituents found in medicinal plants.

A cautionary note: enteric-coated peppermint is well-tolerated at the commonly recommended dosages, but higher doses may cause adverse effects. Caution is also urged with anyone with GI reflux, hiatal hernia, or kidney stones. Please see a qualified naturopath or herbalist for advice and guidance.

Additional applications include its topical use: Soak a clean towel in hot water containing a few drops of peppermint oil, then apply to the abdomen for 20–30 minutes, two to three times daily, as a comforting compress for bloating or distention.

But you need not suffer from a digestive disorder to enjoy peppermint, at least in the form of peppermint tea. No adverse reactions have been reported from peppermint tea, and it may well be the mostly widely consumed, single-ingredient, herbal tisane. The most delicate and the most “cast-iron” of stomachs, alike, will find an after-dinner cup of peppermint tea quite soothing, thanks to its delicate aroma, flavor, and all the beneficial effects on digestion described above. If you have a sweet tooth but, high-carb desserts bother your digestion or your sleep — especially after the evening meal — try it with or without a dollop of honey or agave nectar in place of dessert. Your digestion will thank you!

Chamomile is a botanical nervine that is popular for digestive symptoms, used singly or in combination, as a tisane, tincture, or homeopathically. Sometimes referred to as “mother of gut,” chamomile has traditionally been prescribed in the treatment of both acute and chronic gastric distress, such as inflammation and cramps of the digestive organs. Though scientific studies on humans are limited, there is research on extracts of dried chamomile flowers demonstrating spasmolytic (spasm-dissolving) and anxiolytic (anxiety-dissolving) effects. Along with chamomile’s antimicrobial and anti-inflammatory properties, these actions may explain its overall soothing effect on digestion.

Numerous chemical compounds have been isolated from chamomile flowers, including apigenin. The pharmacologic effects of this phenolic flavonoid are not fully understood, but apigenin has been noted to have an affinity for GABA receptors in the brain, where it may exert a natural inhibitory effect on our central nervous system. (This same mechanism explains the action of some barbiturates and anti-anxiety drugs.) Generally recognized as safe and well tolerated, chamomile may, however, cause rare allergic symptoms in those sensitive to plants in the sunflower (Asteraceae), celery (Umbelliferae), or onion (Amaryllidaceae) families.

Often formulated into combination products, lemon balm, rosemary, and valerian are three additional botanical nervines that can help dispel digestive spasm, relieve excess gas, calm queasiness, and diminish pain. There is somewhat limited clinical evidence to support their use, but based upon observation and available research, these herbs are generally well-tolerated and can be taken orally to help reduce symptoms of GI disturbance.

Lemon balm, also known as bee balm or Melissa, is another member of the mint family used internationally for centuries to allay gas, spasm, and dyspepsia, as well as to increase “calmness.” Rosemary is noted for its antispasmodic effects, and the German Commission E has approved the use of rosemary leaf for the treatment of dyspepsia. Research into the active constituents of medicinal plants often turns up biochemical similarities between different species. Rosemary and lemon balm, for instance, share the polyphenol compound known as rosmarinic acid. Valerian is better known for its effects on restlessness and nervous sleep disturbance, and is often formulated with other herbs such as hops or lemon balm for use as a mild sedative or anxiolytic. Historically, valerian has also been used for gastrointestinal problems such as intestinal spasm and flatulence (gas). 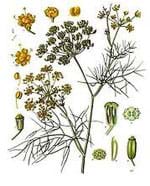 With origins in traditional Ayurvedic, Mid-Eastern and Mediterranean Basin medicine, preparations of fennel leaves and seeds are noted to help prevent and relieve gassiness and diminish bloating, heartburn, and constipation. Fennel is also believed to promote the secretion of digestive enzymes and to improve a weak appetite. For infants with colic, fennel has also been traditionally given as a tea in combination with other medicinal herbs, or as a fennel seed emulsion. In one small trial, significant relief of colic symptoms was noted, with no side effects reported. Fennel is generally recognized as safe, though may rarely cause an allergic reaction. It is not recommended for use in pregnancy. 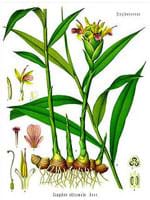 Ginger root has been used and studied extensively over time for a wide range of biological activities. There is considerable experimental data, collected by scientists worldwide, regarding ginger root’s ability to strengthen and mildly stimulate the stomach and intestines, as well as to calm nausea and vomiting. The active constituents are chemical compounds called gingerols, which function as inhibitors of pro-inflammatory chemicals called prostaglandins. Ginger formulations have been relied upon to soothe travelers’ queasiness both on land and sea — even (experimentally) in space! — as well as by women in first-trimester pregnancy to quell morning sickness. Some of the diverse properties attributed to ginger include anti-ulcer, digestive, antimicrobial, antioxidant, anti-inflammatory, anti-nausea (anti-emetic), and anti-motion sickness. It can be used in the form of fresh ginger root or ginger juice, in teas or decoctions, ginger ale, or dried and encapsulated ginger root powder.

A bitters formulation may be an infusion, tincture, or distillation (usually in some type of spirits), of aromatic herbs, barks, fruits, and roots. Bitters have a range of medicinal qualities, but the primary effect is to improve digestion. This occurs predominantly through enhanced production of digestive enzymes, by nutritive support of the epithelial lining of the GI tract, and by reducing intestinal irritation and inflammation.

Many different bitters formulations exist, handed down through the ages from elders familiar with the native flora. Swedish bitters, probably the most well-known here in the Western world, has its origins in 16th-century Europe, where it was used for a number of GI symptoms, including stomach cramps. One “original” recipe is believed to have been a tincture of aloe, myrrh, saffron, senna leaves, camphor, Angelica root, rhubarb root, and other ingredients of a somewhat esoteric nature, in a mixture of several different spirits. Nowadays, there are a number of different preparations labeled “Swedish bitters” that contain more variable combinations of herbs from around the globe. Turmeric (Curcuma longa), cardamom seed, milk thistle seed, fennel seed, dandelion root, gentian root, ginger root, and other herb leaves, flowers, bark, roots, or seeds are among the many plants used. Citrus essences, such as bitter orange or lemon, are frequently added as flavorings to bitters formulations.

Angostura bitters, which most people think of as a cocktail ingredient, was originally compounded as a remedy for stomach maladies. A few drops in mineral water ‘to taste’ makes a welcome digestion-enhancing alternative to the drink menu list of sugary sodas, alcoholic beverages, and fruit juices. It owes its refreshing taste to the bark of the Angostura tree and gentian root, among other ingredients.

These are just a few of the many herbs with a long tradition of use for digestive upset. Look for these herbs at your health food or grocery store, in your garden, or at the office of a local naturopath or herbalist, and give them a try. Keep in mind that no one treatment will work for everyone in the same way, and there are myriad additional components to a natural approach to healing digestion. And as always, before using herbs to treat an ongoing or chronic digestive condition, it’s wise to consult a qualified herbalist, naturopath, practitioner of Oriental medicine, or Functional Medicine practitioner. You can heal your digestion naturally, given time and the proper support, but sometimes it takes professional assistance — from someone with knowledge and expertise — to not only rule out potentially more serious conditions, but also to create a platform from which you can then draw on Nature’s herbal compendium to maintain your digestive wellness.

The latest on digestive health

See all articles on digestion and GI health