Bone broth is the perfect food for these cooler months of fall and winter. Simple, warming and rich in minerals and other helpful compounds, the health benefits of bone broth almost magically line up with some of the season’s most common health concerns.

Trying to boost your immune system against colds and flu? Need relief for your achy joints? Trying to give up your pumpkin spiced latte indulgence?

The answer to all these questions is — try bone broth.

Here are 3 tasty and healthy homemade bone broth recipes to make this fall. Try them all and tell us which one is your favorite!

Your grandmother was right — chicken soup IS exactly what you need when you have a cold or the flu. This homemade chicken soup broth is rich in immune-boosting compounds,drawn from both the bones and veggies in this recipe.

Tip: Adding apple cider vinegar to your broth recipes helps to draw out even more minerals and gelatin from bones.

Place bones and chopped vegetables in the stockpot or slow cooker. Fill slow cooker with water (enough to cover ingredients), adding apple cider vinegar. Season with salt.Slow cook on low heat for 12 hours. If using a stock pot, bring to boil and then lower to a simmer, leaving on stove burner for about four hours. (If using a stove stock pot, monitor water level and add as needed.) Shut off slow cooker or remove from heat. Strain through a cheesecloth or strainer into a clean pot. A layer off at may congeal on the surface of the broth when thoroughly cool. Remove the fat with a spoon and discard. Store in fridge for up to two weeks, or freeze. Makes approximately one quart of broth.

Want to turn your broth into soup? Once it’s strained, add in fresh carrots, celery onion and cooked chicken meat. Simmer until veggies are tender, season and serve.

Bone broth is easy to digest and its high gelatin content is soothing to the digestive tract, helping to heal digestive problems and even facilitate weight loss. Gelatin is also great for easing achy joints. Long cooking times allow more digestion-enhancing gelatin to be released from the bones into the stock, so try this one in a slow cooker.

Add bones and chopped veggies to slow cooker. Cover with water, stirring in vinegar,thyme, pepper and salt. Set slow cooker to low for at least 12 hours. Add additional water if needed. Drain into clean pot. Cool and strain fat. Broth can be stored in glass jars in the refrigerator for up to two weeks, or can be frozen. Use as a soup or stew base, or sub in for water when making rice or other favorite boiled grains. Makes approximately one quart of broth. 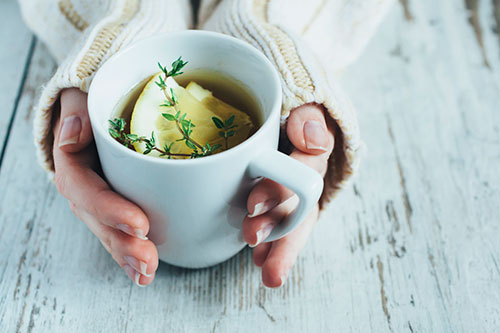 Instead of a pumpkin spiced latte when you crave a warming drink, try this super flavorful Sipping Broth. Bone broth contains electrolytes, making it a good choice after exercising outdoors. Sipping Broth can be made with either chicken or beef bones.

In a slow cooker, add bones and chopped veggies. Cover with water and stir in remaining ingredients. Leave slow cooker on low for 12 hours. Strain and serve. Add a pinch of salt or pepper to taste, or additional fresh or dried herbs (or lemon for chicken broth) for a flavorful garnish. For on the go sipping ease, serve in a lidded travel mug. Broth can be stored in the fridge for up to two weeks, or freeze. Reheat before serving. Makes approximately one quart of broth.