The history behind HRT and new alternatives, such as bioidentical hormones

The purpose of hormone replacement therapy, or HRT, is exactly what the words say — hormones are being replaced as a form of therapy for some condition. Today this is often shortened to HT, for hormone therapy, and some believe the two have different nuances of meaning. But whether we call it HRT or HT, we are fundamentally talking about the use of supplemental hormones in a therapeutic setting.

For more than 60 years, HRT referred specifically to synthetic or “nonhuman” hormones given to menopausal women. Initially the intention was to keep women young and forever feminine. The first brand of HRT in America, Premarin, contained only conjugated equine (horse) estrogens (CEE). However, concern arose in the 1950’s over increasing rates of uterine cancer seen in women using it. This finally led the drug company who manufactures Premarin, many years later, to create Prempro by adding a synthetic progestin.

Over time, doctors were taught that HRT — now offered in a rainbow of brand names, dosages, shapes and colors — prevented heart disease, kept women’s skin and brains youthful, built strong bones, and caused few side effects. Most if not all American women going through menopause were encouraged by their doctors to go on some type of hormone replacement therapy for their menopausal symptoms of hot flashes, mood swings, insomnia, and weight gain. And millions did.

By the late 1990’s, some women were questioning the use of HRT. Did all women need it? Why were all women put on the same dose? What was happening to the pregnant mare whose urine was being used as part of Premarin or Prempro? They wanted to know if there wasn’t some other alternative.

Other women swore by their HRT and never considered the possibility of going off it. Then in 2002 came the results of a large women’s study (the WHI) looking at the effects of HRT (Premarin and Prempro — neither of which are bioidentical hormone forms). Its findings took the medical community by surprise — HRT as it turned out was not found to decrease a woman’s chance of getting heart disease, but rather definitively increased her risk of blood clotting, stroke and breast cancer.

Today there remains controversy about whether the early findings were conclusive, particularly whether they apply to younger women who initiate HRT during perimenopause. In the interim, research has come out that indicates some differences between the effects for a 50-year-old woman placed on HRT and one who begins ten or more years after menopause. Researchers have been tweaking the data from the WHI study to see if there is a subset of women who may benefit from replacement hormones, as well as identifying subsets who should avoid it. Every year, the significance of each reanalysis is hotly debated — 2006, 2007, 2008, 2009 — even among the experts!

Notwithstanding the confusion, women stopped their HRT en masse with the release of the 2002 WHI findings and began seeking alternatives for their menopausal symptoms. So many found that as soon as they quit their HRT, their menopausal symptoms came rushing back. This was terribly discouraging for women struggling to deal with their symptoms but afraid of the health risks of replacement hormones, particularly synthetic forms. And the pharmaceutical companies argued that there were no good alternatives to HRT.

Fortunately, there are natural methods that can help ease the transition off HRT and provide the body the support it needs to minimize or avoid menopausal symptoms. For help during this transition period, see our article on getting off hormone replacement therapy.

Some women have turned to bioidentical hormones as a superior form of HRT. These are female hormones normally manufactured by our endocrine system, principally the ovaries — estrogen, progesterone, and testosterone — which decline as the ovaries stop releasing eggs. By “bioidentical” we mean that the biochemical structure of the hormone is perfectly identical to the main hormones produced in a woman’s body — neither a horse’s hormone nor an artificially contrived formula almost like but just a little different from what a woman produces.

What took so long for bioidentical hormones to come into play? Pharmaceutical companies have had to develop many nonhuman estrogens and progestins in order to patent their drugs. They had hoped the little changes they made to an estrogen or progesterone molecule would not make a big difference to a woman’s body. But today we know that is often not the case. For example, birth control pills are synthetic estrogens and progestins, and, as any woman who has ever taken them can attest, each brand affects her differently. Some women cannot tolerate them at all. The same is true with hormone replacement therapy — bioidentical or synthetic!

In the 1990’s, pharmaceutical companies began developing and patenting unique methods of administering bioidentical hormones. One example of this would be the Climara patch, which uses a sticky transdermal hormone delivery system. While Climara was patented in 1994, the estrogen itself cannot be patented because it is identical to human estradiol.

Moving into the future of HRT

Mother Nature provides a woman’s bodies with many different types of hormones in constantly shifting ratios, and we cannot precisely reproduce her delivery methods or levels in the body. What we can do is approximate her methods and work alongside her: with good nutrition and supplements, appropriate exercise and other lifestyle changes, most women can manage their menopause symptoms very well!

But there are times when a woman can greatly benefit from a dusting of hormones. While it’s always helpful to partner with your practitioner to work through the challenges menopause presents, it’s especially so if you have severe menopause symptoms, early menopause, or your quality of life is compromised. Then the decision about bioidentical hormones becomes more critical.

If you are facing this decision, we encourage you to read about the many options for bioidentical hormones, as well as our article on talking to your doctor about bioidentical hormones, before you go. Remember, the words on this page are just a slice of the history of HRT. There is much more for us to learn, and just as each year brings us new understanding, each new day we have an opportunity to revise our personal health history. We invite you to continue on the path of learning and wellness with us! 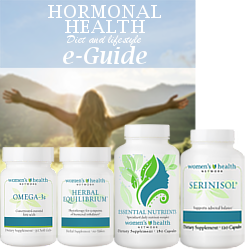 Our Getting Off HRT Program takes the guesswork out of easing off hormone therapy toward natural menopause relief.

The latest on HRT

See all articles on HRT
Suffering from
menopause?